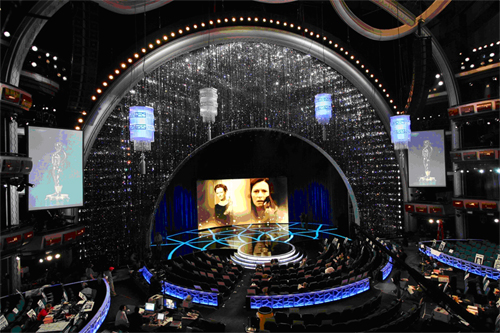 Norridge, Illinois (February 28, 2009), That backdrop of shimmering Swarovski crystals at this year's Academy Awards could never have happened as easily if not for Lexco® Cable. The provider of custom cables supplied five miles of its premium cable to support the 92,000 Austrian crystals that comprised the 100-foot wide by 60-foot tall display. The assemblage was handmade by Orion of Rhode Island and weighed in at a whopping three tons!

Says Howard Turco of Orion: I'd like to thank Lexco® for all of its help. The 1/32" cable Lexco® supplied worked out well to hold all that crystal! (All 22,000 feet of it.) We've used other cable before and paid much more for less quality. The flexibility of Lexco's cable made our job much easier.  Thanks Again."

"It's not everyday that you get to be a part of something that is seen by a worldwide audience," says Neal Karbin of Lexco® Cable. "We only found out the Friday before the Oscars that the stainless cable we had provided would be used for the crystal curtain at the Academy Awards. During the order process, we only discussed breaking strength requirements and the working load."

All told, 6,000 crystal strands and 6,000 different segments of Lexco® cable comprised the luminous backdrop, which was designed by world-famous set designer, David Rockwell.

Lexco® Cable is a family-owned and operated business. It began as a hardware store and Schwinn franchise on Chicago's west side in the 1950s. It continued as a Schwinn bicycle shop on the city's north side in the 60s. In the 70s, Lexco® began making bicycle security cables. During the 1980s and 1990s, industrial applications for cable and wire rope were developed, and capabilities supporting applications fleshed out. In the 2000s, bungee assemblies and their unique elements were developed and are showcased at www.lexcocable.com.  For more information, call toll-free (800) 626-6556.

ALREADY
KNOW WHAT
YOU NEED?

FIRST TIME?
GET A QUOTE
IN THREE STEPS!